Saved Searches Advanced Search
On Hold and Checked Out items are displaying intermittently. We've reported the issue to our vendor and they are working to resolve the issue. We apologize for the inconvenience.
The RBdigital audiobook collection was migrated to the OverDrive platform on September 16.  Please click here if you were an RBdigital audiobook user.
Curbside Services are available, 1-5 p.m. or 3-7 p.m. (see your library's schedule).  Allow 1 week for returned items to be removed from account. No late fines. (Read More)
All SCCLD Libraries remain closed. Virtual programs and library support (Ask Us) are available Mon-Sat (excluding holidays). Some services listed in our website are currently unavailable.  View our list of currently available services. 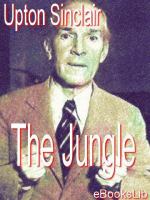 Set in the stockyards of Chicago at the turn of the twentieth century, “The Jungle” by Upton Sinclair is a novel about the brutal conditions of the workers in the meatpacking industry. It exposed the corruption, unsanitary conditions, and health violations in the city that supplied a large portion of America’s meat, and ultimately led to the creations of the laws that ensure unadulterated and sanitary food products up until today.

The novel follows the life of Lithuanian immigrant Jurgis Rudkus after he moves with his new wife and family to Chicago. There, he falls prey to con men, low wages, insanitary work conditions, seasonal changes, physical decay, family accidents, and gloom and despair.

This book was a depiction of the harsh conditions of an immigrant living in Chicago seeking work at the turn of the century. This book is neither light nor one with much of a plot, but it gives the reader a glimpse of America’s past through a fictional narrative. It also contains ideas of socialism and socialist beliefs. I would not recommend this book to everyone, but I think that if the summary interests you, then this book might be worth the read.
-Valerie, Grade 11

Both a product of its time and more relevant than ever today with changes to FDA regulations, this is worth a read.

Having read this gripping ebook during the COVID-19 pandemic that struck heavily immigrant labourers in meat processing plants throughout North America, then Upton Sinclair's social commentary is as valid today as it was a century ago. The trafficing of immigrant women into prostitution by deception continues to this day. The 'Lithuanian' immigrants in Sinclair's story could just as easily have their place taken by 'Mexican' or 'Central American' undocumented migrants of 2020. Have the 'Beef', 'Steel' and 'Railroad' Trusts of the early 1900s been superseded by the 'Social Media', 'Investment Bank' and 'Internet Search Engine' Trusts of the early 2000s?

it is true, sinclair was not a gifted literary stylist. What he was, was a propagandist and a Socialist politician who early on of the 20th century, ran for Governor of California, and almost made it to the top (the job). Long before the days we live in, these days of poorly -run MacDonald's franchises, the meat packing industry was a scandal. The conditions those workers had to toil in, were terrible. The way the animals were killed was horrible. Conditions were disgusting. Sinclair investigated, and wrote this novel. Consequently, legislation was passed which actually improved those horrific conditions./ There was another, similarly inclined writer of the early 20th century, named Frank Norris. To stretch my point, it could be suitable to include Nathaniel West in this list of three great American writers you just might want to check out, sometime in your life, your life, that is.

Upon my completion of reading The Jungle, it certainly struck me that this piece of fiction could've benefited greatly from some serious editing. It also struck me that author Upton Sinclair did not have the knack for being a very dynamic fiction writer.

But, with that all said - I think that the "real-life" story that lies beneath the lines of The Jungle's fictionalized tale certainly warrants itself some well-deserved recognition and credit.

Set within the boundaries of a slaughterhouse environment - The Jungle's graphically descriptive story tells (amongst other things) of meat inspectors deliberately ignoring and passing diseased animals, as well as contaminated meat knowingly being used in the making of sausages.

As I understand it - In order to do research for his book, author Upton Sinclair, apparently, spent six weeks, undercover, investigating the horrifying reality of the Chicago meat-packing industry for himself.

As a result of The Jungle's publication in 1906, public outcry sent out such a loud and clear message that it was heard all the way up to the US Congress who, in turn, promptly responded by passing the Meat Inspection Act.

Over a hundred years old, but still a compelling read. His racism is evident, but one has to consider the time in which he is writing. As to the "socialist rhetoric" one comment found unnecessary, Sinclair was a socialist. My suspicion is that the roughly 15 pages devoted to rhetoric at the end of a nearly 400 page book is to make sure that the reader understand that although the characters are fiction, the evils of laissez faire capitalism are not, and that to Sinclair, America's hope is in socialism.

Even though author Upton Sinclair wrote The Jungle (which was published in 1906) as a work of fiction, his sole purpose for penning this often startlingly and horrific "real-life" story was to bring to the public's attention the truly appalling conditions that existed (at the time) in Chicago's meat-packing industry.

And once Sinclair's book was published it certainly didn't take long for an official, full-length investigation to take place in this industry that eventually (due to public outcry) forced the U.S. Congress to pass the Pure Food and Drug Act, as well as the Meat Inspection Act.

Set in Packingtown, a fictitious district of Chicago, The Jungle's sordid story goes well out of its way to emphasize the day-to-day hardships and the horribly squalid conditions that faced many of the poor immigrants who struggled to earn a living working in what were clearly some of the most unsanitary and humanly degrading conditions imaginable.

Viewed today as something of a historical document - I think that The Jungle is certainly well-worth a read for anyone who's interested in witnessing yet another prime example of man's inhumanity to man (all due to greed and for the sake of profit).

*Note* - Be sure to watch the eye-opening video of activity at a slaughterhouse in 1949.

"I aimed at the public's heart, and, by accident, hit it in the stomach." - (Quote from author Upton Sinclair following the publication of his novel, The Jungle)

Historically speaking - The Jungle is significant in the plain fact that its publication (in 1906) brought to the public's attention the hideously brutal and horrendously unsanitary conditions of the meatpacking industry as it existed in Chicago (and elsewhere) at the time this book was written.

The Jungle caused such a public uproar that it forced the U.S. Congress (through the signature of President Theodore Roosevelt) to pass both the Pure Food & Drug Act, as well as the Meat Inspection Act.

What you are about to read in The Jungle is, of course, a fictionalized account of a "real-life" horror-show like you could never imagine possible.

To research material for his book, author Upton Sinclair actually spent seven weeks undercover investigating the Chicago meatpacking industry. And what his story inevitably brought to light will, most certainly, shock even the most jaded reader of today right out of their socks..... I kid you not.

While reading The Jungle the reader will, no doubt, be constantly asking themselves - "For the sake of profit, did humans really do this to their fellow men?".... And, the answer to that is - "Yes. They, most certainly, did!"

An emotionally difficult (did people really do this to each other?) and important read. Though the narrative focused on abusive labor practices and health issues, it was in fact a call to socialism. This novel and others like it influenced labor law and drove legislators to form the precursors of the Food and Drug Administration.

This is a tough read about the hard scrabble life of Lithuanian immigrants trying to scrape out a living in Chicago during the recession of the 1830s. A captivating story, but it would have been better had it not gone overboard with socialist rhetoric at the end and let the reader come to her own conclusions.

Very realistic and precise about the packing conditions back then.

This book is an indictment of the greed of the capitalist industrialists and the inhuman way they made their fortunes in the early 1900's. We follow a poor Lithuanian as he and his family try to make a better life in the boomtimes of Chicago when all the trains led to the meat packing district. We have our noses rubbed in the filth of the business as well as the filth of the managers. No surprise that our little family suffers one degradation and devastating disappointment after another. Meant to stir up awareness of conditions for the 'common man', Sinclair heaped all he could on those defenseless heads, and he was successful. Labour laws changed, food laws changed and consumers became more knowledgeable about the origins of their goods. Unions were born and the Communist Party gained a foot-hold. Read this is stages as you might be overwhelmed otherwise.

I wouldn't call this a history book. For the appropriate age group, it is a great novel and a very enthralling story.

This is my second time reading this book, I don't think it will ever get old.

In response to sbenger's comment, it was published in 1906 so it focuses on Packingtown, Chicago during that time and before, not the 20s.

Not the easiest read. It is definately a history book, but it really does highlight the conditions for humans and animals in the meat packing industry. It is a definate read for anyone interested in the welfare issues in the industry.

I remember reading this in undergrad (I have a degree in English lit). It's a great, harrowing novel in the journalistic muckraking tradition. Written by Upton Sinclair who set out to write a series of articles about the meat packing plants of the 20's, was it? And found conditions so horrible that he turned it into an entire novel. Readers became so outraged that they started rioting, or something, and all this led to the creation of the FDA.