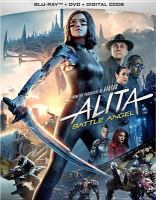 Really pretty good. Action sci fi set in the future. Not too dark or too deep. Just a bit o fun.

This is a dystopian type movie where body augmentation and wealth allow you to live in the best part of the city high in the sky, while the rest of the poor and desperate fight to get the opportunity to ascend through battle.

The over the top fight scenes look fine but also don't make sense in a physics sense. Alita being fast AND strong makes no sense especially when she is stronger than a giant cybernetic man. The story is kind of pointless, the bounties and the rules behind them are pretty dumb especially when the sentinel type machines can instantly beat any assassin so why even use them. The movie sets up a sequel that will never happen. It's an alright action/sci-fi movie but don't get too invested.

Along with Ghost in the Shell (2017), my favorite movie right now...when is Rodriguez gonna finally remake Barbarella?

Really, really, really well done, watched it just in plain DVD, I think it would be so awesome in 4K, or even blue ray. Worth the watch. Can't wait to see if number Two is as good and entertaining.

OH MY FREAKING WOW!!!
Enjoyed the concept, the world-building, the tech, the mysteries, the appearance -- I want to own a copy .... and I want film_2.0!

Very slick- a world-class potboiler by a master chef. Utterly manipulative, and that's what we all want. ("manipulative" is deemed bad only when it's done against our ultimate interests; otherwise we love having our buttons pushed].
Making Alita with enlarged eyes is marketing genius. I'm surprised she wasn't made with a robot dog sidekick. The skateboard-like game theme ties right in. Videogame tie-ins anybody. The cliffhanger end comes as zero surprise.
There isn't an original atom in the whole film, but when you're this skilled at punching people's emotional buttoms you don't need any of that fancy-schmancy stuff, that gets in the way of moving product anyway.

does not let you down! J C And R R made a good movie. I am eagerly waiting for more of Alita

Entertaining. It has heart, and was made by someone with a passion for the material it is based on.

I was surprised that I liked watching the movie. I was also surprised that Robert Rodriguez directed the movie. Didn't Rodriguez make a movie called Shark Boy and Lava Girl? I liked Alita because it speaks about how humanity will intermingle with machines to create cyborgs. In fact, Alita's body becomes intertwined with Martian technology. You can mortally wound Alita's body and it heals and rejuvenates itself. ****In the movie, the ultimate goal is to travel to Zalem. And you can only go to Nirvana or Zalem if you become grand champion in Motorball. By the end of the movie, Alita is a Warrior-Hunter and an expert Motorball participant.

I mean I think the anime was average so the film does at least live up to that. Its beautiful and the world is unique but I just find the emotion its trying to convey just isnt believable. Too much is going on and its all happening in such a short amount of time. Trying to process the relationship with Ido but throw in another love interest makes it difficult to really invest in any character let alone Alita. Granted this was a issue I had with the anime. Action was decent and entertaining and Im glad they didnt PG the gore.

It was a futuristic fantasy x-box kind of movie. Unrealistic, violent fiction. The concept is quite interesting. The end of the movie isn’t the final. There will be more sequence to come.

I really quite liked this one. It's different with a lot of the smash and bash my grandsons like. I think it's either you like it for what it is, a movie, or hate it.

The movie managed to do something I did not expect. The movie was boring, nothing seemed to happen for the first half. The people who made this thing thought if it looked cool you would ignore that nothing was happening. I watched the anime back in the day and I was not bored.

Visually stunning and a great story as well!

500 years in the future, and everything is generic, gendered, and garbage. Leave it to Robert Rodriguez to creep out on his actresses even when they're CGI, and James Cameron to make this motion-captured mediocrity.
The action is boring, the plot is non-existent, and the characters could be from any dudebro pulp sci-fi novel from the 50's to the 80's. Just watch "Chappie" instead and be less disappointed.

Just watched this a second time and I'm beginning to see there are layers of nuances and character arcs in the movie. The first time was great action sequences leading up to the nice end credit song. The second time around, I'm beginning to see this movie is about saving Hugo's soul by connecting with love and he died being a better man than how he was when the movie started with the last face he's seeing being Alitiya. In a metaphorical sense, it feels like everyone wants to reach some pinnacle and people are mindlessly chasing something that's not real and the self-sacrificial love portrayed is the only thing that's real. I was surprised at the nuances I honed into after rewatching as I thought it was mainly all action sequences.

.
FLAWLESS CGI!
.
I don't care for manga or anime or graphic novels because... I'm an adult
but this was really good. It felt like a scene or two were edited out about half way through (perhaps to keep it to 2 hours?) as the main character just leapt into the greater story without enough build-up, as if she knew things she couldn't have yet. It definitely set up a sequel which I will gladly watch.
.
Also, the extras included on the DVD were very interesting and I recommend watching those as well.
.

If you are over 35 more than likely this is one movie you will not enjoy. We are Seniors and lasted 15 minuets and shut it off. What a bunch of pathetic crap I will be more careful in the future in checking out a movie. I looked at the reviews and saw several 4's and 5' and said ,hay what the heck lets give it a try. Oh my god what a worthless movie.

Fabulous collaboration between James Cameron and Robert Rodriguez from an original manga story by Yukito Kishida. CGI abounds and the story is sometimes confusing, but the cyborg characters, battle sequences, and futuristic world building make watching this over-long project worth it. "Motorball" invention is largely unnecessary imho, but when did Cameron ever do anything ever slightly superfluous...