Saved Searches Advanced Search
All SCCLD Libraries are temporarily closed. (Read More) Do NOT return library materials until the library reopens. There will be no late fines on items returned.
Current holds on physical materials will be available when libraries reopen.  No new holds will be accepted.  Ask Us: Account Questions, or Ask a Librarian
Print 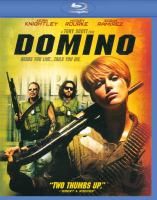 Tired and unsuited to the pretentiousness of her high-society L.A. life, Domino leaves the glitterarti behind and sets off to become a bounty hunter. She quickly falls under the wing of veteran bounty hunter Ed Mosley and his crew and she becomes an unlikely natural in the art of bounty hunting. But things really heat up when a masked gang steal the contents of an armored car. Before long the mob, a crazed TV producer, the FBI and a terminally ill child have all got caught up in the crazy situation. Based on the true story of Domino Harvey, daughter of film actor Laurence Harvey.
Publisher: Burbank, CA : Distributed by Warner Home Video, [2009]
ISBN: 9786312540137
6312540138
9780780659582
0780659589

You have a fondness for tattoos. You've been staring at my goldfish (tattoo on her neck) all afternoon.
-It's a koi (コイ,) actually. The Japanese refer to them as shiro muji (シロ ムジ,) which, translated, means "white... and nothing else."
Do you know why I really became a bounty hunter?
-Because of cxnts like me?
It kills you that while I'm coming into my own, you're stuck in some dead-end marriage. Or, worse yet, an unfulfilling job.
-I'm not married. And I love my job.
Where are you hiding your tattoo? Is it on your ankle? No. Or is it somewhere else? Is it somewhere nasty? You want to know? I'm picturing. I'm picturing something... picturing something delicate, like a rose, or... or a hummingbird. Or, no. Maybe it's the name of a man that you can't bring home to Daddy. No. No, I'm completely wrong, aren't I, Taryn? Oh, God. See, I bet... I'm thinking... that when you go to sleep alone tonight... it's my pxssy you'll be dreaming of.

There are 3 kinds of people in this world...the rich, the poor, and everyone in between.
===
You know what I think? I think you're just a scared little girl with some serious daddy issues.
===
- No shit.
Watch your mouth. God is listening. We need him now.
===
Jesus Christ, Choco. I just got done paying 12.95 for this movie. I'm never gonna know how it ends.
===
I blew off my own goddamn toe. Just to numb the pain. Let me tell you something... We all get weak over women. We all get weak over women. Fxckin' broads are all nuts. They know how to kill us.
===
Ask them politely where the money is. If they don't know, just tell them to start digging their own graves.
===
Mescaline. With each passing second, reality eclipsed into the asphalt horizon. Soon, the mescaline was
pulsing through our veins. ...pulsing through our veins.

What background should someone have if they want to go into bounty hunting?
-How does jail sound? So, tell me, do you boys hunt?
I killed a... I killed a squirrel... once.
-Well, let me tell you something. Once you hunt a human being, you'll never hunt an animal again.
===
They said you tried to pass your granddaughter off as Kee Kee down at City Terrace Community Hospital. They said you forged the age on the application for some sort of operation.
-Motherfxckin' HMOs don't cover grandchildren. Now what am I supposed to do? That fxckin' operation is $300,000. Where am I gonna get the money, Pat?
You should've thought about that before you became a grandmother.

Now Jerry, If you take a look at this... Blactino, blackasian, hispasian, OK? Now, for the Asian subcategories, I got you, sister. We have chinegro right here. That's you. Chinegro.
-That's not a word! That's not a word!
Yes, it is, sister. We have koreagro. Japegro, OK? Chispanic, koreaspanic, and last but not least, check this out, y'all... japanic.
===
Alf grew up during the Russian invasion of Afghanistan. He had always wanted to be part of the revolution but it seemed to pass him by. At the tender age of 14, he decided that explosives would be his specialty.
===
It's not unusual for someone like you... pampered her whole life... to indulge in drugs as a coping mechanism. Not living up to your expectations. Certainly not up to your mother's.

The, um... DMV is the de facto conduit for all humanity, and every human being that we track down has a record in the DMV database. Uh, whether it be LAPD, Social Services, the Credit Bureau, or the FBI, they all use the DMV's database as their hub.
===
Choco grew up on the streets of Venezuela. When he was four years old, he stabbed another kid in the eyeball with a pencil. There were wires crossed somewhere in his soul.
===
Um, and I recommend speaking in short sentences because he has the attention span of a ferret on crystal meth.

You and I walk down the street, what do people see? A couple of losers, right? We add her to the equation, you know what people are gonna think?
-What?
There goes two of the coolest motherfxckers who ever lived. Hmm?
-You know what? I don't know about you, man, but... I'm already a cool motherfxcker, you know?
===
I want a job!
-Jesus fxckin' Christ, lady. Everybody wants a goddamn job. What makes you think you can do this one, huh?
I've been training since I was 12. Knives, guns, throwing stars. You name it, I can fight with it. I'm a hard worker. I'm a hard worker. I'm fast to learn, and nothing scares me. I'm not afraid to die.
-Why would a... delicate little thing like you want to be a goddamn bounty hunter?
I want to have a little fun.

The case laid out at the opening scene:

36 hours ago, $10 million was stolen from an armoured car that was subsequently found abandoned at the Hoover Dam. The driver's name was Locus Fender. We know that he was in on the heist. We know that he was in on the heist. Is it true that you were hired to track down and capture the thieves and then deliver them to Drake Bishop, owner of the Stratosphere Hotel and Casino?
===
After Dad passed on, my mum's agenda was to hit the town and find another husband with a boatload of cash.
===
A week later, sammy died. It was a pivotal moment in my life. I decided to never invest too much emotion in one thing. It's always a set-up to the pain of losing them.
===
And when she is older... A woman named Domino will tell her that there is only one conclusion to every story... We all fall down.

That's my best friend. His name is Choco. He's always fancied me, but too shy to ever do anything about it.
===
That's Ed Moseby, the most legendary bounty hunter in all of Los Angeles. He's my boss, my mentor, the father I never had.
===
Domino: I've never killed anyone. I hope to never kill anyone, even if they deserve it. My agenda is to kick ass and secure the bounty. If I'm on this side of the law, I can live the low life and avoid jail. I can live the nasty and not do time for it. That's called the best of both worlds. As for that other world, that 90210 world, it's not for me.
===
College was even worse. Mum convinced me to join a sorority. It was all fun and games at first. Then the hazing started.
===
Sounds like we got a negro Deep Throat here. Right?

“I may be drunk, Miss, but in the morning I will be sober and you will still be ugly.” -Winston Churchill

What an unusual real life character, along the same genre as Patty Hearst. No doubt a highly fictionalized film with over the top violence, stunts featuring locations as Bonnie Springs Ranch and Stratosphere tower in Vegas. Knightley continues to surprise with diverse roles outside the box. ***Don't watch the last deleted scenes if you do not want to see a hot topless make out session.*** Only 31 years old, she already performed in numerous adaptations of classic novels, Bend It Like Beckham, Pirates of the Caribbean, A Dangerous Method, Jack Ryan, Begin Again etc. Per wiki: Domino Harvey (7 August 1969 – 27 June 2005) was a British bounty hunter in the United States, notable within that field for being female and from a well-to-do background. Harvey's fame was increased posthumously by the 2005 release of the film Domino, which was loosely based on her life, with Harvey portrayed by Keira Knightley, with supporting actors: Mickey Rourke, Christopher Walken, Lucy Liu, Edgar Ramírez, Delroy Lindo, Jacqueline Bisset, Jerry Springer, Tom Waits ...

The only thing i like about this acid styled turd is the bone chilling soundtrack.By the time i saw Tony Scott's usual shootout closing out the end of this so-called true story based thriller,it was too little,and too late to impress me with the DEPOPULATION of a bunch Narcissistic and Arrogant people i really don't care about as characters at all whatsoever period.This is the kicker though:Some of this cast i actually like as Hollywood slaves,but i digress.

Do you know the old saw "If infinite monkeys were in a room with infinite typewriters, they would eventually pound out all of William Shakespeare's works in their correct entirety? Some of those monkeys escaped unnoticed and wrote the script and then directed this cinematic equivalent of a freeway pile-up. This is purported to be the "true" story of Domino Harvey, bounty-hunting hottie and all-around tough girl and her adventures from L.A. to Vegas and you can have it. Not even an all-star cast can save this tragic misstep of a movie, there is no one alive capable of distilling in easily understandable form what the last, oh, hour or so of this movie is about. I had to eject it as it made my brain hurt. The running time was too long by half. No, wait! It was too long by whole. Just a really awful, smug, self-indulgent misery. Leave this one alone!