Saved Searches Advanced Search
Users who are trying to check out OverDrive content through the online catalog are affected. This includes the following items: 1) Kindle Book, 2) eAudiobooks, 3) eBooks for reading in your browser. Please try the following workaround for the time being: 1) Sign into the OverDrive website at https://santaclara.overdrive.com/; b) Under “My Account,” select “Loans,” and then select your title and follow the prompts e.g.   “Read with Kindle Now” or “Read now in browser” or “Download MP3 audibook” or “Listen now in browser.” If the above workaround does not resolve the issue, please contact us by filling out our online support form at https://sccld.org/online-library-support/. We look forward to assisting.
Lobby and curbside holds pickup services are available (see your library's schedule).  Allow 10 days for returned items to be removed from account. No late fines. (Read More)
Limited services are available, including lobby and curbside services.  Virtual programs and library support (Ask Us) are available Mon-Sat (excluding holidays). Some services listed in our website are currently unavailable.  View our list of currently available services.
Print 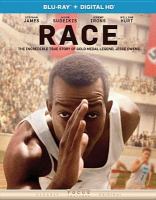 Jesse Owens's quest to become the greatest track and field athlete in history launches him onto the world stage of the 1936 Olympics, where he faces off against Adolf Hitler's vision of Aryan supremacy.
Publisher: Universal City, California : Universal Studios Home Entertainment, [2016]
ISBN: 9786316435422
6316435428

Since 1912, the International Olympic committee has commissioned an official Olympic film, often directed by an acclaimed director of the time, that stands as a visual document of a specific Olympic games. This has resulted in a series of films that show both the progress of the games over the years and also illustrates the progression of film making. The whole set is available at SCCLD… (more)

This 2016 film depicts Jesse Owen's (Stephan James) record breaking streak of four Olympic gold medals at the 1936 Berlin Olympics. The film dramatizes many of the events shown in Leni Reifenstahl's film Olympia, which is included in the 100 Years of Olympic Films set.

Great movie about Jesse Owens. Really great watch considering the time we are living in currently.

Great story about Jesse Owens...a must see for all those that don't know who he was...a great individual who was treated so badly.. yet overcame everything to be a genuine hero.

Superb, even if the NAACP scene with his family was fictitious.

The CG scenes of the Olympic Stadium in Berlin are sublime. You get the whole 360-degree mass spectacle vibe -- which was such an important part of Hitler's success -- but in this case you're wearing Jesse Owens spikes. Good story; timely too. Most probably don't know that the head of the U.S. Olympic Committee and later president of the IOC, Avery Brundage, was compromised by the Nazis. The U.S. didn't comport itself with valor in how it treated its Jewish Olympic athletes, capitulating to Nazi demands. Comedian Jason Sudeikis is terrific playing it straight as Owens' coach Larry Snyder.

These two years of the life of Jesse Owens show his strengths exhibited and trials endured. The script missed the opportunity to bring in the Hitler character as the monster he was, rather showing the German producer of the Games as the bad guy. How much of the movie reveals the real details of these times and how much shows movie drama misses the real story of this great Olympian.

great film, would recommend it in a heartbeat

Larry Snyder: You can run. And boy, can you jump. What I want to know is - can you win?

In those ten second, there's no black or white, only fast or slow.

A vote today against our American athletes participating in these Olympics is a vote against tyranny.
===
History remembers the winners. Every man or woman on that field is grateful for the chance to be there, to meet in the spirit of friendly competition, man against man, nation against nation, to test themselves without fear or rancor against the best the other side has to offer. Surely we all agree the Olympic code is a direct antithesis to Nazi ideology. They're who we ought to be thinking about. Our athletes, those putting their sweat, their blood, their heart into getting that chance. I don't feel I have the right to take it away from them.

I know that it must sound hypocritical for any American to talk about racial bigotry in other countries, but that is the whole reason we must not go to these games. We've got a chance here to show our solidarity with the oppressed people of Germany. It's all a part of the same great hatred. We can make those in power aware of their moral obligation to fight against
the wrongs that we Negroes suffer right here at home.
-You think it's gonna make a damn bit of difference? He stays, they ain't gonna notice. He goes, he can come back with a drawer full of medals, and they will hate him even worse than before.

How can you justify taking part in Germany when there's so much discrimination here at home?
-You know, that's a very good point. When we get our own house in order...
===
I go down to Berlin, it's like telling them Nazis it's okay, like I don't care nothing about what's going on over there.
===
'Cause you know, out there on that track, you're free of all this. The moment that gun go off,
can't nothing stop me. Not color, not money, not fear, not even hate. There ain't no black and white. There's only fast and slow. For those 10 seconds, you are completely free.

I promised you a better life than what we have now. I mean, how else am I supposed to get it?
-I like our life just fine.
You're the only damn person in the world whose opinion matters to me, and you ain't got one.
-I ain't gonna tell you what to do, Jesse. That's why you love me. Jesse?
Say I go. What if I lose?
-You're the fastest man on the Earth.
But you won't be there. My family won't be there. My coach won't even be there.
-Larry's not going?
No. He tried, but they won't let him. I'm gonna be there all by myself, the whole world watching. And if I lose... If I lose, it'll mean those Nazis were right.
-Quit thinking so much, Jesse. It's not what you're good at. You was put here to run. Don't listen
to any of them. Listen to you. You listen to your heart, all right?

I'm sorry, sir, but your friends will have to use the service entrance.
-Are you kidding me? You know who this is?
Yes, sir.
-I mean, they're holding the dinner for him.
Yes, sir. I'm sorry, Mr. Owens, sir, but those are the rules.
===
Do they have any ugly girls in Germany?
-They prefer to keep them out of sight. There are a lot of things they want to keep hidden.

Like the story of Jackie Robinson "42 2013," this film showed only some of the hardships experienced by Owens in his days. e.g. he went to Ohio State without a scholarship. Also, despite being the greatest Olympian then and an around good citizen, he was treated as just another negro, a second-class citizen, by our society. From Owen's Obituary published in NYTs on April 1, 1980: Mr. Owens became a playground janitor because he could not find a better job. He ended his career as an amateur runner and accepted money to race against cars, trucks, motorcycles, ... http://www.nytimes.com/learning/general/onthisday/bday/0912.html

Jesse Owens's quest to become the greatest track and field athlete in history launches him onto the world stage of the 1936 Olympics, where he faces off against Adolf Hitler's vision of Aryan supremacy. 61%/78%