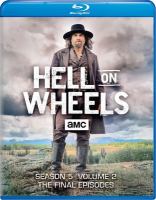 Cullen Bohannon, a former soldier and slaveholder, follows the track of Union soldiers as he seeks vengence for the death of his wife. This brings him to the middle of one of the biggest projects in US history, the building of the railroad. After the war years in the 1860s, this connected the east with the still wild west.
Publisher: [United States] : AMC, [2016]
Edition: Blu-ray edition
Branch Call Number: BLURAY 791.4572 HELL SEASON5 V.2 2DISCS
Characteristics: 2 videodiscs (300 min.) : sound, color ; 4 3/4 in digital,optical,surround,DTS-HD Master audio 5.1 video file,Blu-Ray,region 1
Additional Contributors: Mount, Anson 1973-
Meaney, Colm 1953-
McLeavy, Robin
Entertainment One (Firm)
Nomadic Pictures (Calgary, Alta.)
American Movie Classics Company

HELL ON WHEELS ran out of steam after the first few seasons. I stuck with it more out of a sense of resignation than anything else. Anson Mount's Cullen Bohannon character is an homage to Clint Eastwood in his spaghetti western days, the American male as righteous killer. In these final episodes Bohannon limps (because of a gunshot wound) dazed and confused through every scene. I couldn't help thinking that Mount's spaced out performance was influenced by his realization that he will be forever associated with the character. The low ratings and disastrous reviews of ABC's INHUMANS, where Mount plays Black Bolt, back that up.

And so, AMC’s horse opera comes to an end with “Hell on Wheels: Season 5, Part 2: The Final Episodes”, the saga of Cullen Bohannon, slave holder, Confederate soldier, widower, killer, fugitive, railroad worker, indispensable railroad building genius, enemy, and friend. In Season 5, Part 2 (Why do they do that? Just call it Season 6, okay?), some loose ends are addressed and the railroad is completed. Actually, the addressing of the loose ends takes up most of S5, P2. There really isn’t much railroad building. Bohannon seems more of a tortured soul than ever before, and considering what he’s been through, that is understandable. Maybe if he could have just hugged it out with someone, he’d have felt much better. But that would not have been much of a show, I guess. Not to be too negative, but “Hell on Wheels” occasionally suffers from the same mysterious logic that many TV shows do. An example: Characters in crisis ride off into the wilderness and later someone else rides off into the wilderness to find them, and THEY ALWAYS DO! It seems like the searchers know exactly where to go in the vast, inhospitable American wilderness of the 1800s. Wouldn’t it be incredibly easy to hide, or get lost, for a long time in about a zillion acres of wild, open land? Okay, okay, enough with the ranting. Telling a story on screen requires time compression and shortcuts, I know, but sometimes . . . ah, whatever. Anyway, my opinion of the show overall is positive, it is not as good as, say, “Deadwood”, but still worth watching.

Last in the series finally delivers the Golden Spike which connected the railroad across America. The rest of the drama is just o.k., as lots of loose ends are tied up. The Swede and Durant receive their just desserts, and Cullen Bohannon finds love, though not without a cleverly shot gun battle reminiscent of Clint Eastwood's "Unforgiven".

A decent farewell to a great cast of characters (or what's left) and the final miles of track left. I will miss Cullen Bohanon, Durant and Eva and all the other characters.

Final episodes that introduced the Chinese laborers, future of the survivors and demise for the rest in the completion of the "Great Wall of USA" Union Pacific Railroad (Transcontinental Railroad,) that including the hoopla of driving in the Golden Spike (historically so wrong but this is a fictional romantic drama.) Though never liked the slow pace and most of the main characters, the producers did an admirable job to provide satisfactory closure to each of them: Bohannon, Durant, McGinnes, Gundersen, Eva Toole, Chang and Mei. 3.5 stars

Five years ago, the American people, torn apart by war, cried out into the darkness, and turned a hopeful ear to the void for an answer. Americans needed a dream, and I gave them one: a Transcontinental Railroad that would unite this nation. Dreams don’t come pretty. They don’t come clean and they sure as hell don’t come simple. They come true.

Duran on how the RR was built, part 2 of 4:
Truth delivered by lies is no less true and dreams made reality by falsehood are no less real. Seventeen hundred and seventy-six miles of iron track — that is what I delivered. Track up on which thousands of wheels will now revolve, carrying on their axles the wealth of half the world, drawn by the iron horse, darkening the landscape with its smoky breath, announcing to the world with its piercing scream that we are a great people who can accomplish great things.

Duran on how the RR was built, part 3 of 4:
Yet the American people, driven by their cowardly representatives in Washington are in need of a villain so here I sit, elected by you to play my part — the part of the scapegoat. The patsy sent into the wilderness so that men sitting in this room can lay their sins upon my back and claim they themselves are clean men, enjoying immunity while enriching themselves on the backs of those who sacrificed everything to make manifest America’s destiny.

Blood as been spilled, lives have been lost, men have been ruined. I saw it and I survived. I will not return from the wild having made America’s dream reality only to have six bureaucrats in starched collars judge the manner in which I realized that dream. Put me on trial. Lock me in prison. Erase me from the record. For history is written in pencil and the truth is carved in steel across this nation. And one truth above all others is this: Without me and men like me your glorious railroad could never have been built.

Imagine saving a man's life only to watch his slow death. What breed of monster is capable of such inhumanity. ... No man tortures his enemy, if he must torture himself in the process.
===
I’m weary of gentile serpents and their honey-lipped harlots.
-Well I believe that man just called me a honey-lipped harlot.
===
It’s son’s duty to bury father.
-Then just be his daughter, then.
===
This race is going to come down to inches, not miles, Mr. Strobridge. Couple six inches a day is everything.
-That's what my wife keeps telling me.