Saved Searches Advanced Search
All SCCLD Libraries are temporarily closed. (Read More)
Do NOT return library materials until the library reopens.  There will be no late fines on items returned.
Current holds on physical materials will be available when libraries reopen.  No new holds will be accepted.
Print 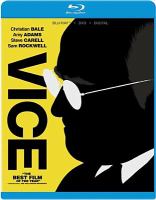 Wildly uneven biopic of Dick Cheney. The make-up dept. gives the greatest performance. A better title would've been "Dick." I was surprised he had so many heart attacks because, well, I guess that means he has a heart. To the dissenters, it's not "liberal propaganda" if it's true.

a half hour was too big a slice of the unwatchable lead character; just say no.

Almost makes one feel that the outcome is to create a situation where a US president is above the law and can do whatever he/she wishes without consequence. Bravo.

Outstanding makeup. The film is far too light on data/facts; it just glosses the surface and makes unsubstantiated claims.

Again - the strongest feature is the way in which Bale was transformed into Cheney.

Interesting Hollywood-ized political enlightenment. It give you something to think about ...

Regardless of one's political persuasion, Vice is an entertaining movie that uses some creative and amusing devices to address the fact that the screenwriter really doesn't know what went on in many meetings. What is fact, what is informed speculation, and what is pure fiction? There are some captions that provide context, but the movie would have more impact if what is known to be true was clearly indicated. Christian Bale is brilliant as the taciturn, contained Cheney. The scene where four powerful men are offered a menu of right wing policies by a waiter is hilarious. However, House of Cards does Power in Washington so much better.

This is a movie with lots of funny bits but its not a fun movie overall. Watching such a self-serving, greedy, power-hungry person ascend to such a position of influence was pretty bleak. It's a very good film. Christian Bale as Dick Cheney and Sam Rockwell as George Bush were both outstanding. It is horrible to watch someone who was chosen to lead by the people and supposedly represents "the people" but has zero interest in actually helping "the people" at all but is only out for himself and to know the whole time that is a true and that it is still happening all over the world. It's a very entertaining yet disturbing film.

Excellent portrayal of the completely greedy, power-hungry, self-serving liar we foolishly gave such unlimited power. Everyone should watch this & open their eyes.

Contrary to the comments posted regarding the subject matter, Cheney and his power hungry wife were only in the game for personal gain. His actions had nothing to do with protecting the American people, his sincerity a facade and nothing more. It was all about protecting American oil assets, especially those owned by Haliburton. You have to go beyond your emotions to get to the truth.

Aside from everyone taking political sides about this film, Adam McKay did an excellent writing and directing job, as did all the actors in their roles, most notably Christian Bale as Cheney. He nailed Cheney, bravo!

The ego of men! I wasn't going to watch this and thought it would be boring. I was so wrong everyone should be watching it. Top Notch acting! I am so glad that big name stars decided to produce this film. Extremely interesting and told in a way that is easy to watch.

***SPOILER ALERT*** For references after the film

The one minute long spoof during the long end credit on the movie review focus group:

Man1: Something's been bothering me this whole movie and I just figured it out. The whole thing's liberal. It's got a liberal bias.
Moderator: Interesting. Does anyone else feel that way? ... One, two, three, four people. Yeah, go ahead.
Man2: It's all facts. Right I mean, they had to vet all this with a lawyer. How does that make it... What's liberal about that?
Man1: You would say that, lib-tard.
Man2: Okay, I'm sorry.So, because I have the ability to understand facts, that makes me a liberal?
Moderator: Okay, guys, let's just take it down.
Man1: You probably like Hillary.
Moderator: Let's take it down a notch or two, okay?
Man2: Idiot. Okay, first of all, Hillary's not president. Okay? The-the-the orange Cheeto that you hired is the president and he's ruining the country...
Man1: Trump is the best thing in this country.

***SPOILER ALERT*** *For references after the film

The end justifies the mean?
I can feel your recriminations... and your judgment... and I am fine with it. You want to be loved, go be a movie star. The world is as you find it. You gotta deal with that reality. And there are monsters in this world. We saw 3,000 innocent people burned to death by those monsters. And yet you object... when I refuse to kiss those monsters on the cheek and say "pretty please." You answer me this. What terrorist attack would you have let go forward so you wouldn't seem like a mean and nasty fella? I will not apologize... for keeping your family safe. And I will not apologize... for doing what needed to be done... so that your loved ones can sleep peaceably at night. Has been my honor... to be your servant. You chose me... and I did what you asked.

Surprised that Rumsfeld's "Known-Knowns-unknown" speech was not mentioned at all. One may disagree with his politics and motives but being a doofus as portrayed in the film, he is not: