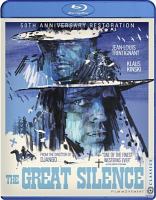 How did I not know about this film?? I've gone through Spaghetti Western phases; Kinski phases. And while I'm watching it I saw clearly the influence it had on Tarantino's The Hateful Eight. I enjoyed every frame. One of the greatest westerns ever made.

With such ruthless, mean-minded, and blood-splattered stories - Why do people place so much stock in the empty-headed scenarios of most Spaghetti Westerns? Eh? Why?

For the most part - I found that 1968's "The Great (ha!) Silence" had no redeeming factor, whatsoever. And, its story ended on such a bleak and hopeless note that it made it completely senseless to have even bothered to have watched this hateful nonsense from beginning to end.

And, finally - Speaking about actor, Klaus Kinski, as "Loco" (the story's villain) (ha!) - He certainly made for one of the most effeminate-looking cowboys to ever ruin a macho-man Western that I've had the total displeasure of having to tolerate.

One of those Revisionist Western that question the ideals and style of the traditional Western like Sergio Leone's "Dollar Trilogy (1964, 1965 & 1967)" but with loud political messages that are still relevant today, as the ending crawl: "The ... year of the Great Blizzard, finally brought forth fierce public condemnation of the bounty killers, who, under the guise of false legality, made violent murder a profitable way of life. ..." The film was released in 1968, the year when both MLK and RFK were assassinated.

Bonus features include two alternate endings. They are no better than the released version but good to see the possibilities.

A 1968 spaghetti-western-in-deep-snow directed by a different Sergio, kind of a low-rent Sergio Leone, little seen in America at the time but now a sort of cult classic. The story itself is weirdly contrived but the photography is very impressive, along with quite good production values. Wikipedia has a very extensive and fascinating entry for this film, and while much of the snow photography is real, other snow scenes are not what they appear to be. The score is by Ennio Morricone. and the two leads were prominent actors at the time so apparently the project had high hopes and ambitions. However Morricone's score was nowhere near my favorite of his.

While I virtually always avoid the dubbed version of foreign films and go with the subtitles instead, in this case when early in the film the mayor is pointing to Utah on a U.S. map and giving instructions in Italian, that was too ridiculous for me and went with the dubbed English version instead.

The ending was not what I expected and I'll leave it at that, beyond saying that there's an epilogue at the end clearly implying that this was a true story, but it is not.

Finally, I notice on IMDB that a movie of the same name is in development right now, but the details are only available on IMDBPro. If this movie is to be remade, I think it's highly warranted and worthy - I would cross my fingers and look forward in anticipation for the reviews.

I think that for one to be totally entertained by 1968's "The Great Silence", they must first, and foremost, be a loyal fan of the movie-genre known as the "Spaghetti Western".

Far from being a fan of these sorts of Westerns - I found "The Great Silence" to be a less-than-exhilarating movie-experience.

In fact - When it came to this film's overall entertainment-value - I'd go so far as to say that it was absolutely mind-numbing, and, yes, downright stupid, too.

Directed and co-written by Sergio Corbucci in 1968, this Spaghetti Western depicts the struggle between the bounty hunters and the refugees in Utah prior to the Great Blizzard of 1899.
Although the character of a mute gunslinger seems unique, the story appears like a typical Spaghetti Western with an awful lot of tiring bang-bang in the bleak and dark tone.

Kinda sorta liked parts of it - I like the Sergio Leoni stuff but this isn't in the same league. The big selling feature was a snowbound western. Riding the poor horses through deep snow may have seemed like a good idea, but really? Same as killing the sheriff with a frozen rifle? His is frozen and can't fire when he meets the outlaws early in the movie, but Loco's is stored in the snow and fires fine later in the movie... Am I missing something?

Highlights of this very bleak Italian spaghetti western include its exquisite cinematography.

A very slow - except for the mass killing scenes - movie with beautiful scenery and nice music.

Once, my husband told me of this man. He avenges our wrongs. And the bounty killers sure do tremble when he appears. They call him "Silence." Because wherever he goes, the silence of death follows.
===
They're gonna kill 'em either way, they're all gonna die! I don't want you dead. I love you.
===
And why are you so interested in this gentleman's liberty?
-There's a community of outlaws in the mountains here engaged in crime.
They live by robbery. You've heard of them. Until such time as an amnesty is given these renegades, bounty killers are our one defense against them.
===
I never did like to hit a man when his hands are tied, but if you make me sick enough, I'm gonna have to.
===
-Thinking is not what a soldier does.
Yes, Governor. No thinking, only rules.

Are you gonna abolish rewards, Sheriff?
-We're gonna abolish crime. We're buildin' a great country, and we're fightin' to make sure justice governs it. And not leeches like you.
You really believe that, Sheriff?
-That's right, mister.
You know, if I wasn't handcuffed, I'd applaud.
-I'll applaud when you're hanged.
===
Killing a sheriff will cost you plenty. If I were you, I'd think it over.
-I don't need to. You're on the side of the law. We? We're on the side of the law of survival. Survival of the fittest.
===
I heard about that gun of yours. Some kind of mechanical gun. Not very accurate.
===
And I'm afraid, Sheriff, that if you don't release Loco immediately, other bounty hunters will be comin' to get him out of jail. That wouldn't be good.
-Reckon that's possible. That's just why they pay me. To keep order. Now them bandits you're all so scared of are nothin' but a bunch of hungry rags. If you folks put some provisions out at the edge of town, they won't bother you any more.

He can't answer, Sheriff. He's a mute.
-Well... I'll be. At least you coulda told me. I mean... you coulda let me know, ya know what I mean?
===
Many of us are not guilty. The price on our heads will disappear soon. The new governor promised general pardons. We have to endure till then.
===
The Old West is finished. Gunmen, bounty killers, bandits and sheriffs will belong to the same world. A better world where...
-Where a politician would give amnesty to the murderer of his own father to win an election.
===
You hate me because I kill bandits. But you do the same thing, 'cause you give 'em to the hangman.
-That's different. The law has a right to kill.
Why?
-Because when the law kills, it's not murder, it's punishment.
===
The massacres of 1898, year of the Great Blizzard, finally brought forth fierce public condemnation of the bounthy [sic] killers, who, under the guise of false legality, made violent murder a profitable way of life. ...

The social commentary, in a Western film from 1968:

You know we have to come down for food and they're always laying for us in the valley. They know we can't last long in this weather without supplies. Still, if we fought for our rights they'd raise the price on our heads and we'd be massacred.
===
This manhunt is inhuman. An amnesty will end it, if that's what the voters should decide on. The old West is finished. We must learn to live with people of all races and persuasions, and unite to make a new West.
===
Loco! Now listen: killing a Sheriff will cost you plenty. If I were you, I'd think it over!
-Uh-uh. I don't need to. You're on the side of the law. We, we're on the side of the law of survival... survival of the fittest!
===
First, all those outlaws in the mountains are headin' there. There's a modest price on their heads. Still, it's a powerful lot... when you add 'em all together, and it's nice and legal, too.
===
You were wise to put your trust in the law, boy.

They're against God, humanity, moral and public order. Killing them is a good thing, believe me.
===
Well, Petes. What times we live in... when a black's worth as much as a white man!
===
There's a bounty on each one. We'll come back and collect 'em later... all according to the law.
===
My husband was a good man. They forced him to steal, to give me a decent life.
===
Cold, ain't it? I reckon I'd head for a better climate if I was you... more like Haiti. Oh, I meant no offence, Pauline, no offence.
===
Charlie provoked him, and drew first. Well, I guess he had it coming, alright. Stranger shot in self-defence. It's a pretty good way to kill someone; the law can do nothin' about it.
===
Those are dangerous men, Sheriff. They're enemies of God and Man. The things they preach... what if one had his say in court and got acquitted? They'd be all be using the courts to spread, whatchamacallit. Nah, it's our patriotic duty to exterminate 'em!