Saved Searches Advanced Search
On Hold and Checked Out items are displaying intermittently. We've reported the issue to our vendor and they are working to resolve the issue. We apologize for the inconvenience.
Curbside & Lobby Holds Services are available (see your library's schedule).  Allow 10 days for returned items to be removed from account. No late fines. (Read More)
Limited services are available, including curbside and lobby service.  Virtual programs and library support (Ask Us) are available Mon-Sat (excluding holidays). Some services listed in our website are currently unavailable.  View our list of currently available services.
Print 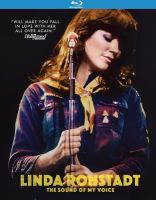 The Sound of My Voice

Alternative Title: Sound of my voice

Entertainer Linda Ronstadt has the unique ability to blend and transcend music genres in order to touch multiple audiences and put out the vision and style that she wants. Never accepting 'no' for an answer, Ronstadt continued to beat to her own drum, utilizing her one-of-a-kind voice to do it. After decades of performing and entertaining, Ronstadt is retired from performing, but her legacy lives on through records, video footage, and the memories that people cherish.

What a voice! What a consummate professional. What a lovely, genuine person. Watch the movie and, as the jacket blurb says, you will fall in love with Linda Ronstradt again.

Although I have always liked Linda Ronstadt I was surprised by just how talented and dignified and classy she really is.

If came of age in the late 60’s/70’s, you will appreciate this well done documentary.

LOVE Linda Ronstadt. So talented and successful in every genre she chooses to enter. So sad she still cannot perform, but her legacy will live on.

Everyone should watch this movie. Linda Ronstadt was an icon of pop/rock music, who also ventured successfully into other musical genre (country, Broadway, mariachi, big band). The movie is the story of her life and music, including a lot of interesting history of pop music in the 70's and later. It is worth watching just for the music alone, but the story is also very engaging.

I'm a huge fan of Linda Ronstadt, and I really enjoyed this film. It was interesting to see how her career started and to hear her songs throughout. I liked that Linda herself did lots of the narration in this film. I would watch this again.

Excellent DVD about singer Linda Ronstadt. Covers her youth; her great-grandfather was German and moved to the southern U.S. which was part of Mexico at that time. The family lived in Tucson, AZ. The family was very musical and the children were all singers. Linda decides to move to L.A. to start a professional singing career. This segment reminded me of the Echo in the Canyon DVD many musical artists were combining elements of rock and folk music (the Byrds, Jackson Browne et al.) and Linda joins the Stone Poneys were she met and worked with musicians like Don Henley and Glen Frey (later the Eagles). She recalls seeing The Doors in L.A. and was thinking they really needed to get rid of their lead singer. She becomes very successful. She had singles on the Rock, Country and R&B charts at the same time. She was never a songwriter, but as others mention in the DVD (even songwriters) once she sang a song she truly owned it as her own. Interesting comments made throughout that in the early 1970s not many bands had a lead female singer and she bonded with other female singers of the time including Emmy Lou Harris, Bonnie Riatt and Dolly Parton. She even sang operetta was nominated for numerous Grammys. She no longer sings due to illness, but her voice is remarkable and powerful and she truly made an impact on female singers in all musical genres. I just wish the DVD had more of her performances in the extras.

Both entertaining and informative with footage of music scenes in the 60s & 70s --- Laura Nyro, Neil Young, Joni Mitchell, Tim Hardin, Kris Kristofferson, Rick Nelson, Elton John, Jackson Browne, Rolling Stones, Beatles, Bonnie Raitt, Dolly Parton, Emmylou Harris, --- and Ronstadt's life outside of her career, a rare inspiring film suitable for all ages.
===
And a live performance clip with Mariachi Varga musicians, at about 1hr. 18min into the film, Linda belt out La Charreada (The Rodeo.) Can't help but be awed and moved though have no idea what the song meant at that time (See "Videos".)

All too often, we don't appreciate something until it is gone, taken from us so suddenly, we may not even notice. Even if we've been able to listen to and love Linda's magnificent voice, having her silenced is still painful. This film magnificently documents her life and career from its earliest days up until her singing was taken by disease. From the 60's, where she worked future legends like Jackson Browne, Don Henley, J.D. Souther to the 90's, where she expanded her already broad range into opera, Mexican folksongs, and the great American songbook, she has done and accomplished as much, if not more, than just about any other artist, male or female. It's entirely fitting that a movie about her be made so that those who never got to hear in her prime, will at least know who she was and what she accomplished.

Those wanting a "concert performance" movie will be disappointed.

This terrific documentary is not so much about the music as it is about the woman who made it, until, sadly, she couldn't do it any more. (At least publicly--we're treated to a bit of recent private singing from Ronstadt in her own home.) So, no, we gets slices of the performances-in cabarets, recording studios, arenas and broadway theatres and on music videos--but no complete songs. Just enough of them all illustrate the points made, and to remind many of us--and to explain to younger listeners--why she was, and still is, so revered.

The phrase "In her own words" describes some of this documentary life-journey, because Linda supplies her own voice-over, during those segments that deal with her family and childhood in New Mexico.

She speaks again in vintage footage from her early years in L.A., offering her own views on--among other topics--men in rock and roll bands. Wow. From a lesser talent, people would scoff: "Who's she to talk?" Well, the answer--even then--was, she's Linda Ronstadt, one of THE talents of rock/pop music. (Yes, even then.) So pay attention.

Others have much to say, too, including, particularly, former lover and song-writer musician J.D. Souther, former band-mate, Don Henley, and her record producer, Peter Asher. All have specific insights to add and each one is very qualified to add them. What was it like--for a woman--in rock back then? More insights from the likes of Emmy Lou Harris and Dolly Parton. In a phrase: really hard.

I don't think that if you disagree with the policies of the government, which I do very definitely disagree with the policies of the South African government, I don't think that's enough of a reason not to go and play music there. If I did that I wouldn't be able to play in the United State because I don't agree with their policies about nuclear power, nuclear warfare. I mean, my God, we've got this person running the country that I completely disagree with. If I decided that I wasn't going to play where attitudes of racism prevailed, I certainly couldn't play in Australia or England or lots of places in the United States, a lot of places in the American South or Boston which is extremely racist. I went to South Africa, it has a fascist repressive government. I'm very interested in the culture down there. ... I don't think my political views are very controversial. Who likes nuclear warfare?

Wow! What a story!
I'm kind of a traditional Mexican myself. You know, I grew up about 40
minutes from the Mexican border, my family are Mexican, and that is my roots. That's what I came from and I have been dying to do this record (Canciones de mi Padre, songs of my father, the largest selling Spanish language album in the history of the industry) for years and years and I'm getting around to it this year. Boy, I'm going to do it. Our neighbor that lived behind us in the garage apartment was Harry Dean Stanton, great character actor and a great singer of Mexican folk songs. We would hear him up until the wee hours singing these Mexican folk songs, these canciones...

Linda could literally sing anything. I don't think anybody has tried more different styles and nailed it than Linda has. There's not that many people
that can pull off new wave music and rock and the most beautiful country ballads. Her range is huge. She decided what she wanted to do. More important what she was authentic at doing. And they always told her no,
you can't do this, you'll ruin your career. She did it anyway.
===
You might starve to death or you might find yourself washing dishes and waiting tables before you ever get discovered.
===
I was 18 years old. We had a house on the beach for 80 bucks a month in Santa Monica. We split the rent three ways. It was just great. It was right on the beach.

Someone once asked why people sing. I answered that they sing for any of the same reasons birds sing. They sing for a mate. To claim their territory. Or simply to give voice to the delight of being alive in the midst of a beautiful day.
===
They sing so the subsequent generations won't forget what the current generations endured or dreamed or delighted in.
===
There are a lot of really good singers out in the world. A lot of better singers than I am. What I did that was different from other singers, I did a whole lot of different kinds of material. People would think that I was trying to reinvent myself but I never invented myself to start with. I just kind of popped out into the world.